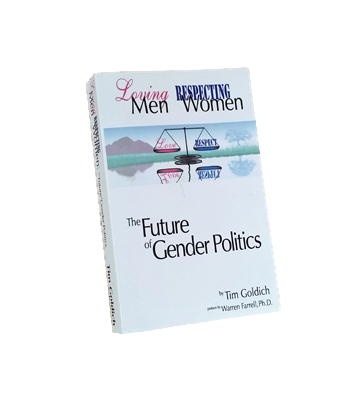 The book in a nutshell: Long ago, Woman and Man, in unconscious collusion, made up a story. It was a story so deep in psychic resonance that it rules to this day. The Story’s a perfect fit with romance and sentimentality and instinct and chivalry. It’s also in alignment with our differing physical appearance and vocal characteristics. It is, in its way, an erotic story—charged with Eros and bolstered by the myths and the mythos dating all the way back to the mighty Odysseus and the fair Helen of Troy. The Story doesn’t hold up under logical scrutiny, but, against such profound psychic resonances, logic doesn’t stand a chance.  Read more

The second book – Love and Respect in the Past: The History of Gender Equality – is due out in 2018.

"In Loving Men, Respecting Women, Tim Goldich describes how listening would work if both men and women listened to each other. And how balance might look once both men and women have completed the process." ~ Dr. Warren Farrell, author, educator, thought leader